“She made broken look beautiful
and strong look invincible.
She walked with the Universe
on her shoulders and made it
look like a pair of wings.”

How beautiful it is to be a strong woman, to always keep others before themselves, to be independent and courageous to raise there voice, to be a woman who doesn’t need to hide behind her husband’s back. I believe that if you have problems, as a woman you deal with them, you don’t play victim, you don’t make yourself look pitiful, you don’t point fingers. You stand and you deal. You face the world with a head held high and you carry the universe in your heart.

Out of million of strong women and there inspirational stories there is one who gives shiver down your backbone whenever you listen to her story. Muniba Mazari, an artist who works two jobs, is a single mother of an adopted son (who completes her life) and she represents Pakistan in the prestigious Forbes 30 under 30 list of top promising young leaders, daring entrepreneurs and game changers from around the world. She’s also a UN Goodwill Ambassador for women to advance gender equality and the empowerment of women and girls

“The driver slept and my car fell into a ditch,” shares Muniba, while recalling the accident that would change her life. “When the driver jumped out of the car, I believed I was going to die. My first thought was I’m 21 and I’ve done nothing with my life. I’ve never lived for myself”

After taking me out of the ditch, I was put in a Potohar jeep as there weren’t any ambulances nearby in Balochistan. I asked people where my legs were. They said, “They are right here.” I was very composed, I didn’t cry. At the hospital, I told the doctors, ‘I’m half paralyzed, I can’t feel anything.’

I was in severe physical pain, but I didn’t cry. “I didn’t cry till I was alone in the hospital room with my mother”

Muniba shares. “My mother asked me to write something with my deformed hand. I tried to write Allah on a piece of paper but I couldn’t manage” . That’s when I finally broke down and started screaming and crying. I realized I had lost something really big. And many people who were close to me had given up on me. For the next two years, I was bed-ridden.

I couldn’t brush my teeth or make my hair properly. I used to hang my hair upside down from one side of the bed so I could brush it. Once, the brush got stuck in my hair. I was so annoyed I took a pair of scissors and chopped it off. I still remember my hair was long in the front and short in the back. 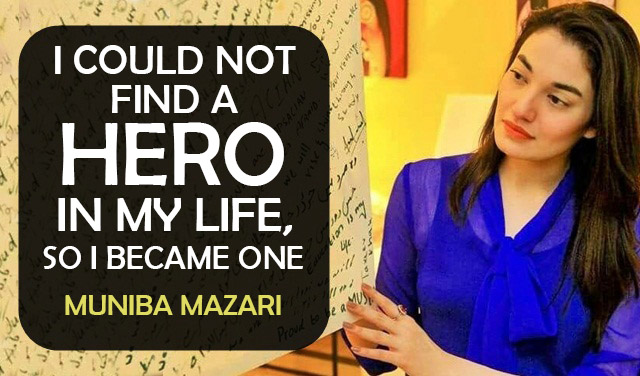 “I was so happy when I sat on a wheelchair for the first time,” shares Muniba. “So what if I lost my legs? I have two wheels now. The first thing I did was to put on some lipstick and check myself out in the mirror.

I thought that I looked like a clown and that a person on a wheelchair can never look good, so I removed the lipstick. But then I put it back on because I decided to accept myself for the way I am.

I became so brave after the accident. After losing so much and being surrounded by so much negativity, I realized I had nothing left to lose. I wanted to prove to the world that a disabled person can live a happy, fulfilling life too. I started a job as a content writer to earn money and started drawing and painting to pursue my passion.

Everyone is fighting a battle on the inside. I’m fortunate that my battle is visible. Most of us are fighting battles that aren’t visible. The key is to keep fighting with a smile on our face.” Woman of Steel, Muniba Mazari Empower Women and Girls Around the World

Desi Aunties you Encounter in Your Life